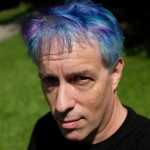 AEL Director Blair MacIntyre is featured on the World Economic Forum’s website, which has a slideshare of his presentation at the “Summer Davos” meeting in China last spring, along with a video highlighting his views on the future of Augmented Reality.  See it at http://www.weforum.org/content/augmented-reality

In his blog, AEL Director Blair MacIntyre discusses the pitfalls of Google’s mockup video of the potential of Project Glass, their wearable computing project that puts a small heads-up display in the users peripheral vision. His comments and further analysis were picked up in a series of news stories in (among other places) Wired, The …

END_OF_DOCUMENT_TOKEN_TO_BE_REPLACED

Google Hiring Augmented-Reality Experts Amid Rumors of HUD Glasses Wired –  February 27, 2012  As rumors swirl around Google’s plans to announce head-up display glasses by the end of the year, the company has quietly begun advertising for a designer and engineer responsible for augmented-reality mapping.  . . .We talked with Blair MacIntyre, director of …

END_OF_DOCUMENT_TOKEN_TO_BE_REPLACED

Comments by Blair MacIntyre on Google’s possible “AR Glasses” picked up by a number of news outlets. How Google Glasses Could Create ‘Augmented Reality’ by Year’s End Mother Nature Networth – February 23, 2012 (Tech News Daily) From a technical standpoint, a pair of commercially available, augmented reality glasses by Google are very possible by the …

END_OF_DOCUMENT_TOKEN_TO_BE_REPLACED

MacIntyre quoted in story about Google’s “Solve for X”

Google Mashes Up Eggheads’ Big Ideas With Solve for X Tech News World  – February 7, 2012 Google (Nasdaq: GOOG) has launched a new program devoted to fostering discussions and ideas among leaders in the science and technology industries. The project, dubbed “”Solve for X,” aims to be a seeding ground for solutions to some …