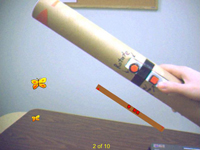 The motivation for this project is to create a puzzle game to be played in augmented reality, utilizing the strengths and weaknesses of that media.

While the AEL is not the first lab to create an AR game, past efforts have largely been adaptations of existing video games. These adaptations, while technically interesting, generally fail as games due to standard problems of AR, such as registration error, display update latency, small field of view, and equipment bulkiness. This project seeks to design and build a new game which is designed expressly for the media of augmented reality, keeping in mind the sorts of interactions afforded by the media. Furthermore, we have added the practical constraint that these games could be played on the next generation of video game consoles equipped with the right peripherals.

In this game, the player collects butterflies in a net. For butterflies which are out of reach, the player may rotate the entire virtual world, changing the positions of all remaining butterflies. To encourage safety and careful movement, games are scored based on the efficiency with which the butterflies are collected, not the speed. Butterfly Effect is a prototype created using DART (the Designer’s Augmented Reality Toolkit).