Maria Engberg and Jay Bolter are guest editors of the February 2014 issue of the journal Convergence. They present a set of papers by eight media studies scholars and artists on the significance of AR and MR for cultural expression. Here is an excerpt from their opening editorial:

The widespread availability of smart phones in the last 10 years has redefined AR and MR that had previously been confined to the laboratory…. Along with the commercial uses for location-sensitive advertising, new forms of cultural expression (e.g. for art, design, and social media) are beginning to appear. Appropriately for this journal, these new forms can best be studied by a convergence of disciplines, including media studies, art history, literary theory, philosophy (particularly phenomenology), interaction design, sociology, anthropology, communication studies, human–computer interaction, and computer science. Many of these disciplines are represented in the contributions in this special issue that focuses on the ways in which AR and MR participate in cultural expression in today’s heterogeneous media economy… 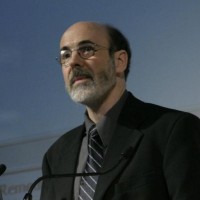 Jay David Bolter is Wesley Chair of New Media at the Georgia Institute of Technology and co-director of the Augmented Environments Lab. He is the author of Turing’s Man: Western Culture in the Computer Age (1984); Writing Space: The Computer, Hypertext, and the History of Writing, (1991; second edition 2001); Remediation (1999), with Richard Grusin; and Windows and Mirrors (2003), with Diane Gromala. In addition to writing about new media, Bolter collaborates in the construction of new digital media forms. With Michael Joyce, he created Storyspace, a hypertext authoring system. With Blair MacIntyre, Maria Engberg, and other collaborators in the Augmented Environments Lab at Georgia Tech, he is exploring use of the Argon browser to stage experiences for art, entertainment, and cultural heritage.