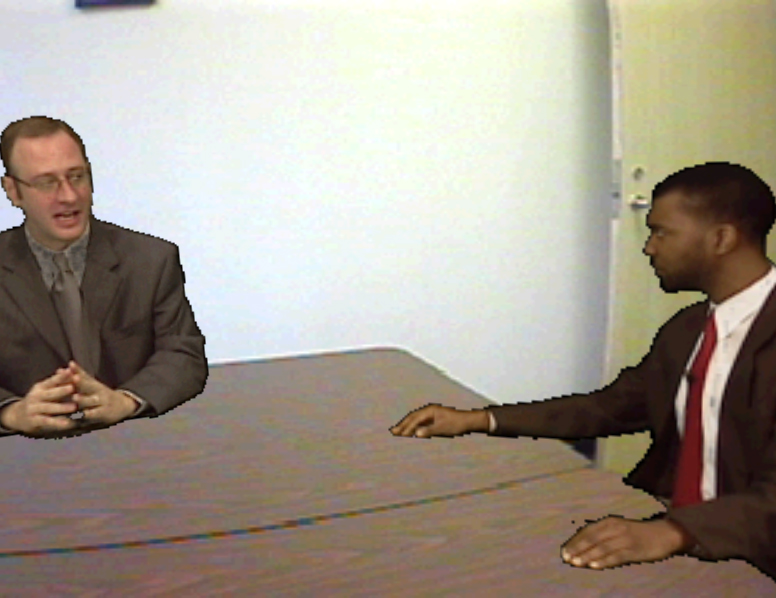 “Four Angry Men” (FAM) evolved over the course of two years from being not only an experiment in creating dramatic AR, but to serving as the impetus for the design and development of the Designer’s Augmented Reality Toolkit (DART). The initial version of the experience included fewer characters and thus was called “Three Angry Men” (TAM)

FAM is a single-narrative, multiple point-of-view augmented reality, in which the viewer/user becomes a participant in an abridged version of “Twelve Angry Men.” In FAM, the user witnesses the drama from the viewpoint of one of four jurors, and her perception of the scene reflects the expectations, beliefs, and prejudices of that juror. The user sits in one chair in a physical space representing the jury room. Through the head-worn display she can see three other virtual jurors (as texture-mapped video) occupying other chairs in the room. The user herself hears the words and the inner thoughts of the fourth juror, whose seat she is occupying. At any time the user can get up, move to another chair, and assume the point of view (POV) of another juror. While the user moves around the actions stops and rewinds slightly when she sits down; allowing the user to easily compare the a section of dramatic action from difference viewpoints. To represent the four viewpoints, four different six-minute versions of the experience were filmed for each of the characters and edited. The actors interpreted their roles differently for each version, allowing the user radically different viewpoints on the same dramatic scene.

Written by Reginald Rose, “Twelve Angry Men” was originally a teleplay, presented during the “golden age” of television drama, and was then made into a film. In the past four decades, it has been a frequently performed stage play and has been made into a second film version. In Rose’s play, twelve men of various backgrounds are locked in a jury room to determine the guilt or innocence of a young Hispanic, accused of killing his father. Although the original vote is 11 to 1 for conviction, the lone holdout manages to convince all the others to put aside their snap judgments and look at the case with both reason and compassion. The jurors work through the evidence and eventually all vote to acquit.

The process of developing TAM and FAM revealed to us the need for rapid prototyping tools for AR. After spending resources on production of code and video multiple times only to discover the experience was not as we hoped, we realized the need for early and iterative user experience testing. The needs we identified for AR authoring via the TAM process defined the initial set of features we designed into DART. The final version of FAM was then built using DART.

This work was supported by a GVU Seed Grant.