Google Hiring Augmented-Reality Experts Amid Rumors of HUD Glasses
Wired –  February 27, 2012
As rumors swirl around Google’s plans to announce head-up display glasses by the end of the year, the company has quietly begun advertising for a designer and engineer responsible for augmented-reality mapping.  . . .We talked with Blair MacIntyre, director of the Augmented Environments Lab at Georgia Tech, about the rumored glasses, and he got right to the point: “They will have to do a lot for people to consider buying them.” . . . “The problem with the [integrated display] approach is that the blend of outside light and display light is kind of fixed,” he says. “For the blending to work, there has to be an optimal amount of light coming in from the world. So if the world is very dark, you’re not going to see much of it — but you’ll see display. If the world is very bright, you’re not going to see much of the display — you’re going to see mostly world.”
http://www.wired.com/gadgetlab/2012/02/google-hiring-augmented-reality-experts-amid-rumors-of-hud-glasses/ 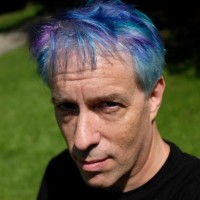