Most recent update: NerdHerder is released for both iOS and Android device. People can download and play NerdHerder on their fast smart phones and tablets (including iPhone 4s, iPad 2, new iPad, and fast Android devices).

You also need to print out a game board to play the game from http://www.micronerd.net/print. 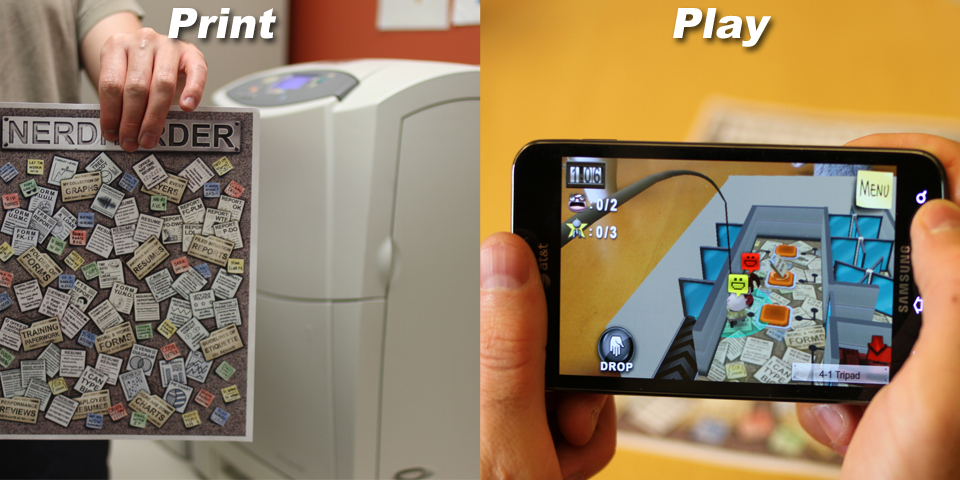 NerdHerder is a motion-based puzzle game that leverages handheld Augmented Reality (AR) interfaces. Nerderher was first developed as part of on ongoing exploration of interaction mechanics in AR games, that started with NerdFerno.. The current game’s premise is that you are hired as an IT manager, and your job is to use “management skills” to get the nerd employees back to work in their cubicles. The game description and video can be found on www.MicroNerd.net.

Over the past semester, we have focused on taking the original concept and demonstration, and bringing it to the next level by rethinking the core game mechanics, physical actions, and engaging puzzles and environment design.  We have created new game mechanics that fit better with the HAR interface and game theme, and integrating puzzle-solving elements in the HAR game.

Through the process of fast iteration and playtesting, we tried out three major mechanics of using a HAR interface and several variations of these mechanics as well. These game mechanics include push-and-pull (Hands-on Management), remote-control characters  (the Art of Delegation), and virtual fishing pole (Carrot-and-Stick). Each of these game mechanics is fun in different ways, and has its own pros and cons. Different kinds of play behaviors and physical actions emerged during playtesting. We hope to continue to refine these interactions and evaluate them more formally over the next year. 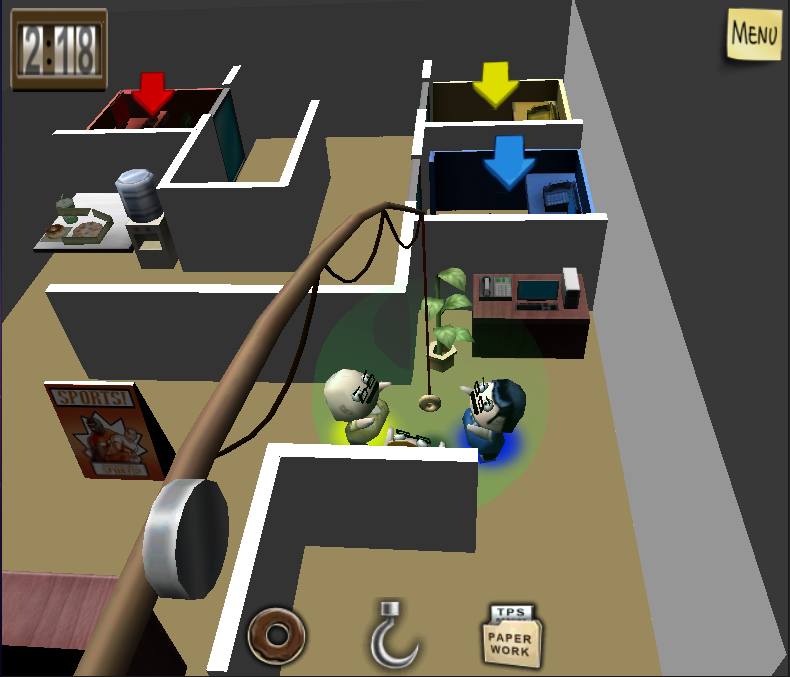 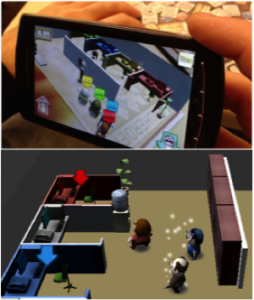 Most existing handheld AR games focus on action game genres, especially shooting games. With NerdHerder, we opted instead to experiment with a different genre of gameplay that closely combines the cognitive skills of puzzle solving with dexterity and fine-motor skills. We believe that by exploring the diversity of possible gameplay mechanics and genres we can better understand both AR game design and AR interaction.

In October 2011, we presented a version of NerdHerder during the ISMAR demo sessions, based on the push-pull mechanic. Over 50 people played our game, and we received feedback from researchers and practitioners that we have used to improve the mechanic. We also demoed the same game during the Future Media conference hosted at the Georgia Institute of Technology in November 2011. The feedback that we received from both of these conferences was integrated into a version of the game we submitted to the GDC Independent Game Festival student game competition for in December. We will present a workshop paper about NerdHerder at the Mixed Reality Game workshop at the ACM conference on Computer-Supported Collaborative Work and this February.

We will continue to iterate on the game to polish the mechanics and the levels, with the goal of releasing this game in the Spring of 2012.

View all posts by Yan Xu